These chemicals are often found in the blood of many Americans. Find out useful and effective ways to limit your exposure to them!

Feeling a little overwhelmed with the recent Environmental Working Group’s (EWG) report on how certain chemicals mess with your hormones? Scared to know that many of them are already found in blood samples of most Americans? Aren’t sure what to do about it or where to start? Don’t worry. There are steps that you can take to avoid chemicals that disrupt your endocrine system and throw your hormones out of balance. Some are easier than others, but they’re all worth it. Check them out:

1. Be careful when it comes to furniture and carpet

Furniture and carpet can be full of worrisome chemicals, such as fire/flame retardants called polybrominated diphenyl ethers (PBDEs) and stain- and water-resistant coatings made with PFCs that threaten healthy thyroid function.  As they break down over time, PBDEs are released into the air and form dust. Unfortunately, they are also extremely persistent in the environment. The highest levels of fire retardants nationwide have been found in blood samples of California residents according to this article published by the National Institute of Environmental Health Sciences. What can you do? Consider buying organic furniture and area rugs made with natural fibers.  Also, before ripping out any old foam carpet padding, take precautions to not breathe in dust by wearing a mask and safely dispose of any old material right away. Also, the EWG suggests using a vacuum with a HEPA filter to keep toxic dust in check.

Many problematic chemicals, such as optical brighteners, sodium perborate monohydrate, and glycol ethers — all of which can have negative reproductive effects — can be found in dozens of conventional cleaning products, which is just one reason to go green.  For example, glychol ether has been linked to developmental abnormalities and lower sperm counts. So try green cleaning today.  It’s easy to start because you probably already have many safe ingredients in your own pantry, such as vinegar and baking soda, that you can use to clean multiple surfaces throughout your home.

Adults are made up of about 55-60% water and children much more, so drinking and cooking with safe water is essential.  Using a reverse osmosis system

or a good water filter to help cut down your exposure to arsenic, atrazine, lead, and perchlorate — all notorious hormone disruptors, is a good idea. Why bother? Well, the EWG points out several reasons, such as how arsenic messes with the glucocorticoid system, so you can end up with insulin (diabetes anyone?) and weight issues.

Don’t buy foods that come in cans or are packaged in polycarbonate plastic (#7) to avoid chemicals that mess with your hormones, such as BPA, a well-known estrogen mimicker that is in the bodies of up to 93% of the American population according to the EWG. In addition, bypass foods wrapped in plastic wrap as they may contain phthalates, which have been shown to have negative health effects on male reproduction, such as lower sperm counts. Instead, buy whole, fresh foods. That way you’ll also skip a host of other unwanted chemicals, such as preservatives, added salt, etc.

5. Forget about most fish

Unfortunately, toxic chemicals such as mercury have made their way into our waterways, which means aquatic life has been affected, and fish are no exception. Mercury has dire developmental and reproductive effects, so care must be taken as to which fish are the best choices. Those at the top of the food chain are the worst ones, because they contain more mercury. The EWG suggests wild salmon and farmed trout as good options. For more ideas, check out this About.com article that lists fish with the highest and lowest levels of mercury.

“Baby powder” scented perfumes, “cotton candy” candles, and “peach blossom” air fresheners might sound innocent and safe enough, but when you consider they are made with synthetic fragrances that contain phthalates, their innocence goes right out the window. In addition to their negative impact on male reproductive function, phthalates are also linked to thyroid issues and other health problems like diabetes and obesity according to the EWG. So, consider fragrance-free products or those scented with natural essential oils instead. Also, for some effective and safe DIY natural air freshening ideas, check out this article.

Animal products, such as meat, milk, and butter, often contain traces of dioxin, which affects male and female sex hormones, so cutting down on the amount you eat and considering vegan options now and then is a safe way to go. Check out VeganCooking.com and VegWeb.com for some inspiration! 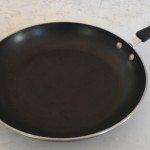 Toss non-stick pans in the trash, especially if they are nicked up, to avoid the release of potential endocrine disruptors.

The EWG explains that non-stick pans contain perfluorinated chemicals (PFCs), which not only persist in the environment and never break down, but also persistently create health problems, such as altered thyroid and sex hormone levels. Worse yet, Dr. Mercola, a well-known holistic health doctor, notes in this article how at high temperatures these non-stick coatings “break down into a chemical warfare agent known as PFIB, and a chemical analog of the WWII nerve gas phosgene.” And it only takes 5 minutes for chemicals to be released! So toss your old non-stick pans in the trash, especially if they are all nicked up. There are plenty of “green” pans

on the market that are safer alternatives, not to mention the old classics — stainless steel, glass, and iron.

Organic produce doesn’t have nasty chemicals sprayed on it, such as organophophate pesticides, which affect testosterone and thyroid levels. Plus, it doesn’t use genetically modified seeds or synthetic fertilizers. Also, it often has a higher vitamin and mineral content, though this is not always the case as noted in a prior post.  Regardless, going organic is a win-win situation and a wise choice over pesticide-sprayed produce. If your grocery budget only goes so far, though, focus on buying leafy greens and thin-skinned vegetables that are organic versus thicker-skinned produce, such as avocados, bananas, eggplants, and watermelon, which aren’t as affected by pesticide sprays.

Phthalates, glycol ethers, and a host of other scary chemicals abound in conventional cosmetics and personal care items, so it’s critical to use organic products, especially those that stay on your body and don’t get rinsed off, such as body lotion and foundation make-up. Check out the Environmental Working Group’s Skin Deep cosmetics database for help on determining just how safe the cosmetics you’re using really are.

11. Store water and food in glass

for lunches on the go.  And if you must use plastic wrap, never place it in the microwave. Also, use glass water bottles with protective silicone sleeves to prevent breakage, such as these ones

from Life Factory, as a great replacement for plastic water bottles, which may contain Bisphenol A (BPA), an endocrine-disrupting chemical you want to avoid.

PFCs are sometimes used in the manufacture of stain- and water-resistant fabric and clothing, so choose organic alternatives whenever possible. You’ll not only escape the hormone-disrupting effects of PFCs, but enjoy clothing made without the use of synthetic dyes or other harsh chemicals, such as chlorine bleach. In addition, you’ll be making a good choice for the environment, especially if you are buying organic cotton, because growers don’t use genetically-modified seed, synthetic fertilizers, toxic herbicides, or harmful pesticides. Some popular on-line organic clothing stores include BlueCanoe.com, Indigenous.com, and Gaim.com.

As a final note, I’d like to point out that doing a detox is a great way to assist your body in getting rid of many unwanted chemicals. Check out my blog post, “Top 10 Reasons to Do a  Detox” for more information.