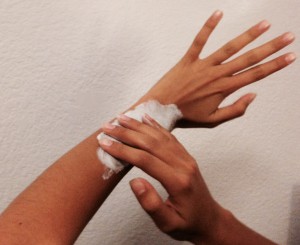 I’ve always been under the impression that titanium dioxide (TiO2), which is a natural mineral, is a great alternative to other chemicals used in sunscreens and skin care products that block UV radiation, because it doesn’t penetrate the skin, but instead sits on the surface of the skin. Well, a study that came out in the American Chemical Society (ACS) journal of Chemical Research in Toxicology made me question just how safe it really is.

The researchers set out to test two different forms of titanium dioxide — rutile and anatase — because previous studies have shown that titanium dioxide may have toxic effects when it reacts with UV rays. Yup, you heard right! The very thing titanium dioxide is supposed to protect you from can make it have serious negative health effects! So, the researchers wanted to see how the particular types of titanium dioxide would react when exposed to different levels of UV radiation, even low levels, such as those from indoor light. According to Science Daily’s review of the study, the researchers found that rutile caused hardly any problems at all, but that anatase was very difficult to wash off and caused damage to the skin. The negative effects seemed to happen via free radicals, which are detrimental to the skin and may potentially cause a host of problems from aging to cancerous lesions.

This is clearly a problem because titanium dioxide is an active ingredient found in hundreds of sunscreen, skin care (e.g., moisturizers, anti-aging products), cosmetic (e.g., eyeliners, eye shadows, mascara, lip gloss, nail polish, bronzers, concealers, foundations), and personal care products (e.g., toothpaste, shampoo).  After doing a little research, I discovered the amount used in sunscreens seems to vary anywhere from less than one percent to the high teens. For example, MyChelle Sun Shield SPF 28 uses less than 0.67%, whereas California Baby Super Sensitive Broad Spectrum Sunscreen Stick, SPF 30+ contains 17% titanium dioxide. By the way, titanium dioxide can also be found in a slew of other products, such as paint and even food!  So, it’s one hard mineral to avoid.

So what can you do?  Based on the research, two things seem clear to me.  One is to use products that contain compounds to counteract free radicals, such as green tea, and the second is to avoid products made with the anatase form of titanium dioxide! Of course, another option would be to seek out products that don’t contain titanium dioxide at all. Badger, for example, makes a sunscreen that contains zinc oxide, which is another mineral that helps block dangerous rays.

But if you like a particular product that contains titanium dioxide, how do you know as a consumer which form it contains? It’s hard to tell since manufacturers simply have to list the term titanium dioxide, not the exact form. So, it seems the best thing to do is contact a company customer care rep! The more companies hear concerns from consumers, the more likely they are to address ingredient issues on their websites and product labels. What do you think? Do you still plan on using products with titanium dioxide in them?