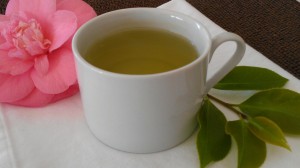 Green tea, which is derived from the Camellia sinensis plant, has been shown to be beneficial in improving cognitive function, especially working memory according to a new study. It might also be prove useful in treating cognitive impairments, such as dementia.

Need a natural boost in brain power? How about some green tea, then? According to a recent study from the University of Basel published in the academic journal Psychopharmacology, researchers have shown that green tea extract enhances cognitive function, especially working memory.

Read on to learn more about the study and how to get similar benefits on your own, whether that’s by sipping a cup of green tea or taking an extract.

To conduct the study, Swiss researchers had healthy male volunteers perform memory tasks before and after drinking a milk whey-based soft drink containing 27.5 grams of green tea extract. They then used magnetic resonance imaging (MRI) to see how that impacted the brain and found that there was an increase in the brain’s connectivity, specifically the activity between the parietal and frontal cortex, which directly correlated to the improvement in task performance.

These findings “suggest that green tea might increase the short-term synaptic plasticity of the brain” according to study researcher Prof. Stefan Borgwardt in a press release. Also, one of the clinical implications of the study is that green tea might be beneficial for treating cognitive impairments, such as dementia.

This all sounds great, right? So, if you want to consider taking a green tea extract, what’s available?

Green tea extract is available in capsule and liquid forms with and without caffeine. Most commercial green tea extract capsules contain anywhere from about 300 to 500 mg., whereas liquid extracts can vary quite a bit with values ranging from 100 to 2000 mg. per serving. Therefore, when taking an extract on your own, you’re getting an amount substantially less than the study participants did — as much as 275 times less if you’re taking a liquid product containing 100 mg. of green tea extract, for example.

In addition to the total extract amount, many reputable manufacturers also state the amount of polyphenols (plant chemicals with antioxidant properties) and catechins [types of antioxidants found in green tea, such as Epigallocatechin Gallate (ECGC)] present in their products. So, read labels and be on the lookout for these details when comparing products to make sure you get what you want.

If taking an extract is not exactly your “cup of tea,” then consider drinking some tea instead. In one cup of tea, you’re getting about 80 to 106 mg. of the active polyphenols naturally present in green tea according to this WebMd article. When comparing this to a green tea extract, roughly one 500 mg. capsule that has been standardized for 60% polyphenols contains about 300 mg. of polyphenols. Therefore, three cups of green tea is roughly equivalent to about one standardized 300 mg. capsule of green tea extract.

So, if you enjoy drinking green tea, it’s a great choice. However, do be aware that according to this 2004 study published in the American Journal of Clinical Nutrition, the antioxidants in green tea are better absorbed when taking extracts rather than drinking tea. But of course, if you weigh in price and perhaps your enjoyment of tea, having a few cups of tea may still be the way to go. Choose what works for you and your lifestyle.

Although green tea is a natural substance, the caffeine in it can mix unfavorably with certain drugs. Especially dangerous are those drugs that stimulate the nervous system, such as amphetamines and ephedrine, because they can cause serious side effects ranging from increased heart rate to high blood pressure. In addition, moderate interactions may occur with other medications, such as antibiotics, birth control pills, estrogen, depression medications, and more according to WebMD. For a complete list of drug interactions, check out this article.

Obviously, the findings of this study are quite incredible considering the potential cognitive benefits green tea offers. And whether you choose to drink a few cups of green tea or take an extract, you’re taking in a much smaller amount than that used in the study. However, I don’t think this is an issue. Green tea has been revered for centuries for its health benefits — both physical and mental, when taken in much smaller doses than that used in the study. Also, according to this WebMD article, taking in too much green tea (i.e., more than 5 cups) is “probably unsafe” due to the side effects of the caffeine content. So, using decaffeinated green tea or extracts might be worthwhile if you’re thinking about consuming a lot. And if not, less is still more in this case.

What do you think? If you drink green tea, have you noticed an improvement in your cognitive function? Also, are you going to start or continue drinking green tea? What about taking a green tea extract? Please share your thoughts by leaving a comment.

One thought on “Boost Your Brain & Improve Memory With Green Tea”