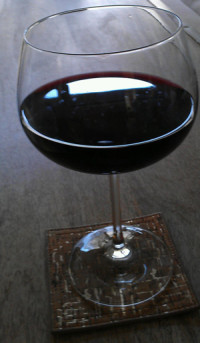 I enjoy savoring a glass of wine every now and then, so when I heard the latest research news about how resveratrol, a potent plant polyphenol found in grapes and other foods, can help ease depression and more, I thought it would be worthy to share with you.

Read on to learn exactly what the study showed. Plus, discover which wine has the highest resveratrol content and how you can get this important antioxidant in your diet in other ways, some of which may very well surprise you.

The research study, which was led by Susan K. Wood, Ph.D., assistant professor at the University of South Carolina School of Medicine, was recently presented at the Experimental Biology 2015 meeting. It was done on socially stressed rats, who were “bullied” by larger, dominant rats. The rats who were given resveratrol, which was equivalent to that found in about six glasses of red wine, showed no signs of depressive-like behavior or increased inflammation in the brain unlike the rats not given any supplementation at all.  Also, resveratrol appeared to knock down inflammation systemically according to Julie Finnell, a doctoral student in the research team.

With regard to these significant results, Wood stated, “Certainly, there is a strong case being built now between clinical and preclinical work that inflammation is linked to depressive symptoms, and there is a great need for these findings to be validated in human studies.”

Considering inflammation is one of the leading causes of disease and around 121 million people worldwide suffer from depression according to Healthline, the findings of this study are quite significant. They could vary well translate to humans. And let’s face it, all of us deal with social stressors at one time or another, so a little help in fighting off the physiological and mental effects doesn’t hurt.

Given these fantastic benefits of resveratrol, what’s the best way to get it in your diet?

So, should you start drinking wine? And if so, what kind should you drink?

Well, there are plenty of ways to get resveratrol besides becoming an avid wine connoissieur, but moderate wine consumption does seem to have its benefits. A 2013 epidemiological study published in the journal of BMC Medicine showed that drinking two to seven glasses of wine each week may help reduce the incidence of depression, but that heavier drinking may increase it. So moderation is key.

When given the choice of red or white wine, go for red. It contains about six times as much as white wine — 1.89 mg/glass to be exact. The grape variety and the region matters, too. Pinot Noir grapes from Burgundy, France and Oregon have the highest amounts of resveratrol, whereas the lowest amounts come from warm and dry regions according to this article by Resveratrol.net. So, when perusing down the aisles at your local wine store, head straight to the “Pinot Noir” section.

Of course, if drinking alcohol isn’t your preference or if wine leaves you with unpleasant side effects, such as headaches, then consider resveratrol-rich foods or supplementation as a great option.

By now you’ve probably guessed that red grapes are a great source of resveratrol, but what about other foods? Here’s a short list of foods loaded with resveratrol (some of which may surprise you) that I put together based on information from Reveratrol.net:

By the way, you might think that raisins would be a good source of resveratrol, right? Nope. The drying process kills off many of the phytonutrients, leaving you with a fruit with, well, shriveled up nutrients.

What about supplements? There are plenty of good ones on the market, but they do differ a bit. Some companies make pure resveratrol supplements, such as Gaia Herbs and Reserveage, whereas others, such as Planetary Herbals, blend resveratrol with other botanicals, such as grape seed and green tea leaf extract. All are equally good. The choice depends on what you’re looking for.

Companies can also vary in the sourcing of their resveratrol, supplement strength, and delivery form (e.g., capsule, tablet, or liquid tonic). For example, Reserveage makes a 100-, 250-, and 500-mg resveratrol capsule

and a tasty liquid tonic

, a liquid phyto-capsule equivalent to 60 bottles of red wine according to the company, that is sourced solely from Japanese knotweed.

As you can see, you can easily get quite a bit of resveratrol in supplement form. But how much should you take? According to this WebMD article, specific dosage requirements vary from one company to the next and long-term effects in humans haven’t been confirmed. WebMD also points out that “to get the equivalent dose used in some animal studies, people would have to consume 2 grams of resveratrol (2,000 milligrams) or more a day.” So, that’s something to keep in mind if you are taking the supplement route.

What about drug or supplement interactions? WebMd cautions that resveratrol may interact with certain medicines, such as blood thinners (e.g., coumadin, warfarin) and non-steroidal anti-inflammatory medications (e.g., aspirin, ibuprofen). Also, because certain herbal supplements (e.g., dong quai, feverfew, and ginkgo biloba) and even foods (e.g., garlic) act as natural blood thinners, it’s possible there could be an issue if you’re taking really high doses of them and supplementing with resveratrol. Therefore, check with your health care provider or pharmacist before starting any new supplement regimen.

Clearly this recent research shows that resveratrol has amazing benefits that seem to help depression and decrease inflammation in the brain and throughout the body. And considering a multitude of other studies show other positive health benefits, such as how it may help fight cancer, heart disease, diabetes, and Alzheimer’s, making sure you have some resveratrol in your diet seems like a great idea. I know I’m on board.

What do you think? Will you make any dietary changes or start supplementing with resveratrol considering this latest research news?